This weekend I facilitated the StoryHunt Data Expedition with DatenSchule & OpenBudgets EU. Thank you to all participants for humouring my eccentric facilitation.

Every data expedition is different and we always end up adapting to circumstances. This is a post on some new things we tried this time. I hope it is useful to other facilitators.

What is a data expedition?

A data expedition is an event format revolving around a data-based investigation with an interdisciplinary team (who you have just met). Teams choose a question and see how far they can get along the data pipeline in a set timeframe.

Data Expeditions can be a bit like a hackday, in the sense that you are trying to achieve something in a set amount of time and you have a computer to help you.

Where they differ from hackdays - in my opinion - is that there is a particularly deliberate focus on the roles different skillsets play and on learning. Additionally the outputs do not have to be something in code: a visualization drawn on a piece of paper, a blog post or a list of reasons why you couldn’t answer the question, are all equally valid outputs from a data expedition.

Data Expeditions are an ideal complement to workshops, as learners move from the controlled environment of the workshop to working with real data and all of its associated gnarliness.

During the weekend, we will form interdisciplinary teams that collaboratively work on finding stories, leads, and data analyses around the EU and its money flows. This will offer an ideal opportunity to practice the acquired skills in a supportive environment. From the Storyhunt website

So, what new things did we try this time?

In data expeditions we encourage people to pair on problems, ask questions and learn from others. People are always willing to help, but there are some ways of coaching someone trying to learn which are better than others.

A great coaching tip I learned is OpenTechSchool’s “Lava Keyboard” analogy, which we actively promoted this weekend: 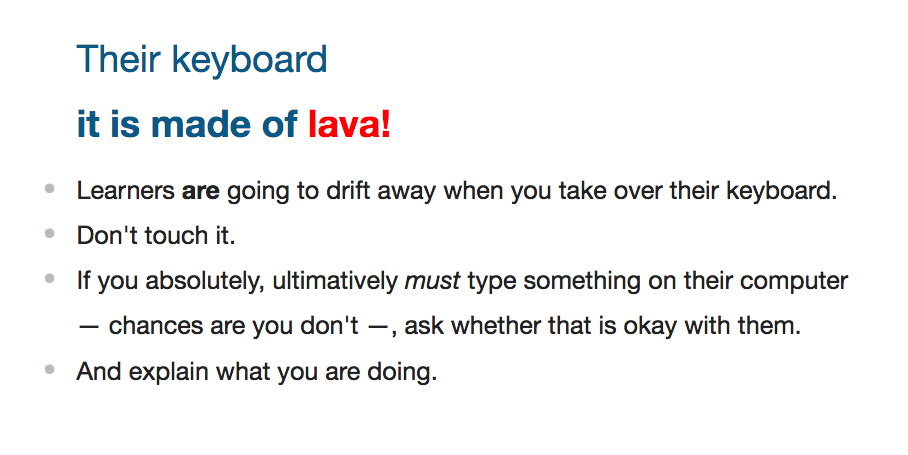 How to encourage constant sharing

One common problem in data expeditions is that people get sucked into their own research and forget to talk to others #StoryHunt (1/3) pic.twitter.com/g1a44z6ayl

Data expeditions involve a lot of online research to investigate hunches, follow up on leads and verify facts. People absorb a lot of things very quickly, but these new gems stay in their heads and the rest of the group doesn’t benefit from them.

The trouble with knowledge is, it tends to only get shared when it is really fresh; people start to take new knowldge for granted almost instantly. The result? The person who has done the research gets smarter, but the group as a whole doesn’t benefit to the same extent.

StoryHunt was three days long. Three days is pretty short, and to get the best out of it a team should constantly re-evaluate whether a current line of enquiry is worth pursuing or whether it is likely to be a useless rabbit hole. One way to help them with this is to add some artificial tension.

In order to simulate the “newsroom tension”, we did two things:

It certainly seemed to work. Also: you’d be afraid of that face, right?:

This is the very rich, *very* mean lady who might fund your data project (with paper money), if you pitch well enough at #StoryHunt pic.twitter.com/4ewMTxRz0c

Have you run a data expedition recently? Did you try anything new? Let me know at @lucyfedia on Twitter! I’d love to hear them.